You may have noticed a lack of Science Saturday last week. I got a lot of emails and messages asking if I was okay, if perhaps there would be no Science in the year 2013, if the Apocalypse really did occur a week late and everyone had transcended into a forgetful yet pansophical knowledge of the universe—just as the Mayans predicted—and now we would be doomed to forget every Saturday. I thank you for your messages and concerns.

However I am going to offer another reason why you thought there was no Science Saturday last week. It may in fact have been an illusion of your mind. This duality—that is the relationship between our mind and the world—is the subject of this week’s Science Saturday and, I am in a position to say, the biggest question in all of science! (At least in select areas of science, like biology and psychology and other non-science subjects like philosophy.)

Philosopher René Descartes, the “I think therefore I am” or “Cogito ergo sum” guy, started the modern study of the “mind-body problem”. It seems René was driven to philosophy after years of schoolboy teasing by the schoolgirls and so finally asserted that the entire world existed only inside of his head. He asserted that, when it came to mind and matter, mind was clearly superior (thus creating another saying: “mind over matter, though it originally translated to the rather sophomoric “mind over women”). So in this case, it could be only in your mind that last Saturday passed without a blog post from me when in fact that Saturday did not exist anywhere but in your mind. 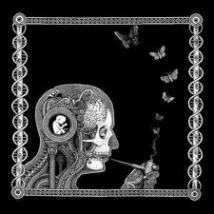 According to Google Images results, an illustration of the Mind-Body connection.

Philosopher Immanuel Kant had a stranger idea in the 18th century that perhaps our minds are programmed as part of a bigger cosmic Mind—a God Mind—and all of our bodies are programmed parts of the larger nature outside of us—a God Body or “Gody”. This idea has gained some traction in the world today amongst some scientists (read: Sims fanatics) who believe that everything in the universe is part of one big computer program. Every atom in the universe, every blank and dark region of space contains bits like a computer. And who would say that even the most flawless God Computer doesn’t glitch along the space-time continuum sometimes?

The writer of Doors of Perception Aldous Huxley famously asked his wife to dose him with LSD before his death in 1963. Aldous’s grandfather Thomas Huxley had a proto-1960s acid thought of his own on the subject of the mind. The Zoologist and avid Darwin supporter theorized that consciousness was a simply a by-product of our brains. In other words, your mind is like an appendix for your existence: you could get along just fine without knowing anything of your existence. (For more information on existing without knowledge of your own existence, see my future post on the role of reality stars on American television.) Huxley’s defense of me might be that it simply doesn’t matter at all whether I remembered to write for Science Saturday or not. Like hippie parodies would state later, “It’s all in your head, man. Just let go.”

Descartes, Kant, and Huxley could all defend the disconnection between my mind and body last week—if the week did in fact exist. Then again Descartes may pick my brain and ask why the Holy Spirit inside of me, which communicates with my brain, did not move me into action last week. After all, I did feel as if it were Saturday last week too. Kant might still help me out. He may ask the Cosmic Mind why It had forsaken me at the witching hour. Shouldn’t this problem be called the “Mind-Body-Design problem” anyway? Huxley wouldn’t fret at all. His only concern would be that I fulfilled my primitive animal duties. But I tend to side with Kant (at least in this case). The Mind-Body-Design transcends any human reasoning in a single bound and leaves us here on earth, trying to fit the Design into a telescope.

What qualifies me to write this article? A degree in biology from the University of Florida and my own Mind-Body relationship.

–It’s a Beautiful Day, I Need a Calendar