In 1890, the German chemist Friedrich Kekulé woke up from a dream. After spending a few decades trying to figure out the chemical structure of benzene, the dream had revealed the secret. What he saw was a kinky green snake with the masochistic idea to eat its own tail. 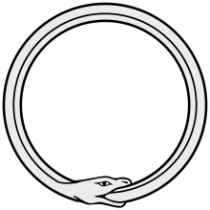 A snake eating its own tail, or the Ouroboros

Whether the self-destruction of such a dream reveals some deeper psychological damage within Kekulé himself is not the point. The theoretical chemist woke up and immediately drew the structure of benzene: a ring with 6 sides and floating double bonds. It was the itchy building block of a thorn put into the sides of science majors all over the world. According to Alan Lightman, Einstein discovered the theory of relativity in his dreams. Archimedes too had his Eureka moment drifting to sleep in a salty bath in Syracuse. But not all dream Eurekas are so successful.

After the discovery and acceptance of human-harnessed electricity (more than one New York Times editorial titled something along the lines of “Tesla Is Not A Magician” finally convinced the masses) a Swedish proto-electrician named Gregor Sobero started work on an electric snow vaporizer. Sobero spent years deciding on a structure. An electrical vine that would snake from snow particle to particle? An electrical buckshot he could shoot into the snow?

Alas, one night he woke up from a dream, shouting, “I have conquered you, icy snow devil! Now all of Sweden will be lush and green and full of life year ‘round! The seasons have been vanquished with one swift sweep of my electric net!” The Swedes are not known to be concise.

In Sobero’s dream, he was sitting in a boat on a vast Swedish lake. It was pristine, still, and large as an ocean. In his hand was a hoop that looked like a tennis racquet without a net. He reached down into the water and scooped up three large herrings, all shocked and buzzing and dying in a blue electrical net that suddenly held the fish.

When Sobero woke up, he rigged up the net to the best of his knowledge and walked out his front door into the waist-high snow. What he did not realize is that the very wet snow now all over his body would conduct the electricity in his net as well. He was zapped stiff in the Swedish snow. Nearly a century later his design would be used to kill mosquitos.

There is a long list of dreamt failures such as Sobero’s in the sciences.

And the list goes on. As these citizen-scientists wish they could tell you, it’s not always a good idea to follow your dreams.

What qualifies me to write this article? Well two painful semesters in organic chemistry, for starters. On top of that, I’ve spent hundreds of hours researching failed scientists from around the world. It was exhausting, but I think this 500 word article was well worth it, no?