The following is a selected entry from the pioneer John Wesley Powell’s diary. At the time of this entry, Powell was exploring the Colorado River north of the Grand Canyon.

In all my life, I have not turned down an adventure. The two days after our Day of Independence, Goodman—a Brit anyway so what does he care for our Independence?—quit the expedition. Where were we? In the heart of the Mormon colony of Utah on the Colorado River. My men were somewhat disheartened and it was my duty to rehearten them.

“Men! Should we forget the tragic battles of Vicksburg or Big Black River Bridge? Nay, we should remember the sacking of Atlanta, that vile city!”

“But Major, I did not fight in the war,” Howland said and I could sense his weakness. He would not survive, I thought.

He had a point, I will admit. The mission was cracking up. Perhaps I was too. That night the ghost of Saint Paul reunited me with my right arm. It was not my first occasion seeing ghosts on my travels.

“This is quite the digs, ain’t it Major?” Saint Paul said as he walked around my small burlap tent. “Stole this architecture from the Indians or savages as you call them, did ya?”

I had not the voice to answer. What’s more, I barely heard him speak. On such a wonderful occasion—my arm was intact! There was no pain!—I could only think of Emma Dean.  Were I to show her my new-old fleshy arm, she would take me to our bedroom at once. That arm was expert once at pleasing me you know, she would say. A choir of devils and angels would sing alongside each other. I can even see that pointy-horned Satan disguised beneath a white angel’s robe watching intently while the other angels had the decency to keep their eyes trained on the sheet music. Even the devils would be too enthralled in dirty revisions of the Hallelujah chorus to turn their heads.

The ghost of Saint Paul seemed deep in thought. “What are you contemplating, Sir Saint Paul?”

“That’s Sir Saint Paul of Tarsus to you, buddy.” He said sternly. Then a smile lifted his steely eyes. “I’m kidding Major! A thought just struck me. No blinding light and voice of Jesus this time though. It’s a voice of your future. The future of your country that is.”

The thoughts of my future country stirred grandeur ideas in me. Would the future remember a crippled Union Major, would they remember my expedition? Or would I be lost amongst these ochre rocks, the color of ancient Athenian flames?

“You’ve led the Howland brothers to their deaths. I know you were wondering. They will be captured by a band of Mormon missionaries on the other side of those hills. The missionaries mistake them for holy men-imposters and chop off their heads. But you’ll be fine and you’ll go back to Illinois to live out your years with Emma Dean, whom you’ve severely neglected on these expeditions by the way.”

Hardly could I believe my ears. For a second I did not. Why should I? I was no religious man. I was not beholden to idols. These truths I had explored and roundly thought to be false. None of my men wore crosses on the treacherous rapids of Disaster Fall.

For if there was a God, where had He been hiding in Vicksburg, behind a round oak in the southernwoods? And why had He sent a clown such as Paul in a ghastly golden, suit-slacks one-piece, zipped from waste to chest? [Historian’s note: we believe Powell was referring to what would now be called a jumpsuit, somewhat similar to the outfit Devo wore in their ‘Whip It’ music video.] I could not believe that Paul ever had his sight restored in a gaudy outfit such as that.

“You know one day people will name cities and lakes and counties and streets after you? Why do you still look terrified? That’s great news, come on! Of course, Michelangelo painted a giant fresco for me… And have you seen that painting by Caravaggio? I look like a scared little child, but dude could paint!

“Back to my thought. I was just thinking that, a century from now people will ingest chemicals like LSD in order to see visions of me. They’ll put a little tablet the size and consistency of a postage stamp on their tongues and four hours later POOF! I’ll be there. Of course, I’m not so easy to get rid of as they expect. You better have a bowl packed and bag of Cheetos ready because you got eight hours with me kiddies. And all you had to do to see me was travel down the Colorado River into the middle of the world’s largest canyon, lose a good deal of supplies, not to mention four good men, live in a squalor little tent and brave the horrid July heat of Arizona. Bet you feel kinda stupid for being born in the 19th century, huh?”

I could hardly follow the man-ghost. L-S-D? Was this witchcraft? But no, of course I didn’t believe in witchcraft either. All I knew was what I felt and at that moment it was a mixture of terror that another ghost was back and that I could not tell a soul on the expedition lest they think I was going insane; and also glee at my restored arm. I pinched my false forearm to make sure this was not a dream.

Then Saint Paul was walking outside the tent and so I followed. He glanced at the sleeping men. Small desert shrubs circled the camp. We exited. The banks of the Colorado lie beneath us, down a gentle slope of red river sediment. This earth was new, speaking geologically. I was filled the wonder of my expedition once again looking at this sand, feeling it underneath my bare feet. The sand was red like a gutted horse.

Saint Paul began to walk into the rapid river. I followed for a few paces, then realized the river was moving much too swiftly for me. The river dipped deep in the middle. For a moment Saint Paul was submerged and I thought he had disappeared forever, but he continued to the other side, golden one-piece completely soaked and in poor condition.

I realized Saint Paul was walking toward something on the other bank: a female Pronghorn Antelope. She appeared to be of medium build. The sight of a singular female Pronghorn Antelope was odd indeed and there was no sign of her fawns. Saint Paul walked toward her. At first she was frightened, but Paul pet her, subdued her. Then, in one swift and violent act, he wrapped his arm around the poor antelope’s neck and dragged her into the water. Her small legs kicked in the water like compass arms wheeling beneath a magnet. At last she came to rest, but not before coughing blood onto Paul’s chest and neck.

“Remember who’s in charge of this expedition,” he said in something above a whisper, yet I heard it as clear as thunder. A searing pain stretched up my right arm, a cannonball striking it again, the 24 hours of surgery to amputate it—all in one moment.

I awoke the next morning and felt for my arm but of course it was not there. I knew that I could not tell the men of my haunting. But I could tell our Paiute Indian messenger, Tau-gu, for he would barely understand a word of it. When Tau-gu came to camp I took him aside.

“I have a story for you,” I said and then acted out the night’s events with Saint Paul. Tau-gu smiled at my theatrical gestures, not understanding the gravity of my story. At the end he clapped and said, “More.” 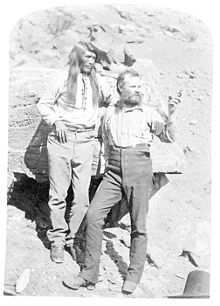 –It’s a Beautiful Day, I Can Hear the Angels and Devils Singing Alongside Each Other