Hiller and I went a million miles from home to drink. It took 45 minutes on the bus. The plan was to visit strange bars on the forgotten side of Portland. The natives called it “Mock Crest” and it was where the serious people lived.

Inside the Two Point Inn, our first bar, the country music ate up all the sound the people tried to make. The fake mahogany shined and reflected the lonely neon light, the only light in the entire establishment. Our intentions were to have one drink and then walk on, perhaps adding to our mysterious appearance here where it seemed clear we did not belong. When I pulled out my small notebook to write a note, the mustachioed bartender—a hulk of a woman—walked over and derisively asked “are you writing poetry in there?” I knew then we must escape, feeling painfully misunderstood.

The Twilight Room looked familiar. The large neon sign and copper bar top conjured up an amalgamation of all the decent, but largely forgettable, bars I had ever been in. Like the Two Point Inn, the Portland Blazers are on the TV and so the bartender and patrons had little time to be distracted. Someone’s mother played the lotto at a digital slot machine. A woman shuffled past us in the Delirium Tremens Waltz. 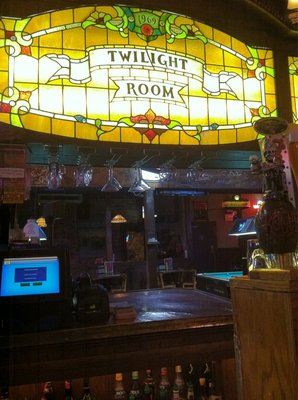 The people seemed largely uninterested in us so Hiller and I entertained each other and wrote in our notebooks and enjoyed our strangeness. Hurrying to catch the bus to our next location, we tried to convey to the bartender our urgency in every possible way except verbally. The headlights shone in the shifting evening light and we jumped up and down and rung our hands and stared holes into the back of the bartender’s head as he slowly processed our credit cards.

The bus came and went and as Twilight Room’s only visible employee gave us our checks, he remarked slyly, “You missed the bus.” I heard a familiar resentment in his voice.

So we walked to the next bar, tipsy enough not to mind, pissing on insurance buildings and lawns. It was amateur poker night at the Mock Crest Tavern, with assorted beard stubbles and wandering eyes women who imitated men. Smiles crossed their lips only intermittently between faces of lubricated concentration. I longed to be a part of their game, though I knew that if I walked over and joined it would be like entering the lion’s den.

Imagine if, at the last supper, the tableaux had included a pool game instead of food. I can’t get unstick that image of the Sweet Home Bar & Grill from my memory, though the two are strikingly dissimilar. All eyes were on the duel between the carpet salesman and the squat woman with surprising pool talent. It was engaging and so I wondered if a part of my brain longed entertainment by sporting events, live.

Hiller and I were, of course, not a part of the tableaux. We sat omnisciently adjacent, commentating and reacting to people’s reaction to game’s interactions. The “Rainbow Connection” came on and people primed their Kermit impressions as the squat dealt the final blow to her opponent and crowd gave polite round of applause as if they had not been completely enamored with the voyeurism of watching others compete. We imagined the claps were for us and walked out onto the street, roses in our teeth. No one turned toward us at the door. A woman in pajamas walked past us into the bar. 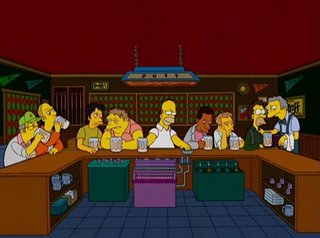 And so in the foreign land we made our last stop at the Tiny Bubble Room—Lung Fung by day, MSG-aroma-ed bar by night. We were greeted somewhat skeptically for our Florida IDs, took a seat but could hardly stand the strangeness any longer. We downed our PBRs, snuck out the back and made our way to Heavenly Donuts. Teenagers talked about us in the corner and the donuts oozed in unfamiliar ways.

Back home we drank beer and time traveled with a game of Goldeneye on the Nintendo 64. Better to stay at home.